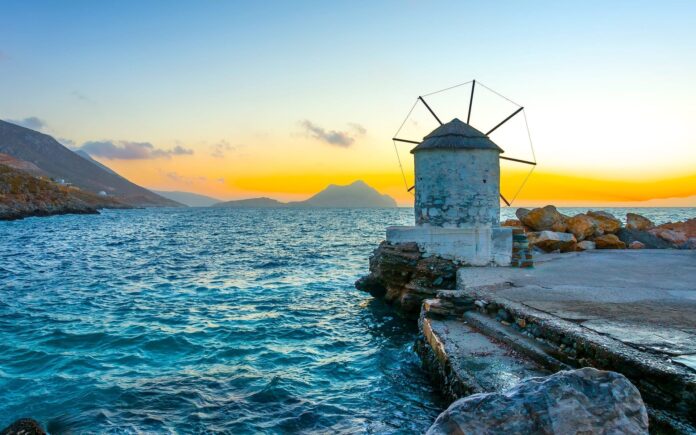 Find out everything about your holidays in Amorgos on our travel guide! Located near Naxos and Ios, on the southern side of the Cyclades archipelago, Amorgos is one of the most beautiful Greek islands. So, it’s not a surprise that it was the setting location of the famous 1988 movie “The big blue”, starring Jean Reno!

Boasting a mindblowing natural landscape, minimal Cycladic architecture, mysterious caves, and fabulous Amorgos beaches, Amorgos island is one of the hidden gems of the Cyclades islands. Untouched by mass tourism, Amorgos Greece is the perfect holidays destination for those who seek privacy and tranquillity, as well for nature lovers! The hiking trails that cross the island are perfect for exploring the nature of Amorgos, while secluded Amorgos beaches are ideal for naturists!

Amorgos Greece is located in the Aegean sea and belongs to the Cyclades islands group. Despite being a quiet island, Amorgos island became popular thanks to Luc Besson’s movie “The big blue”, which was filmed there!

Chora Amorgos, the island’s capital, is one of the most beautiful villages in Amorgos. It is located in the center of the island, insulated by rocky hills and boasts a scenic setting! Wandering in Chora Amorgos, you’ll come across traditional whitewashed houses with colorful shutters, narrow alleys, embellished with flowers, an imposing Venetian Castle, beautiful churches and little taverns. A stroll around Chora Amorgos is a dream!

When the night comes, head to the island’s traditional taverns to have shots of homemade “rakomelo”, a local alcoholic beverage and taste yummy local delicacies, such as “ladotyri” (local cheese), “kserotigana” (fried pies) and “patatato” (goat with potatoes).

The most popular site of the island is Panagia Hozoviotissa, an impressive Amorgos monastery, perched on a rocky cliff above the sea! This 10th-century cliffside monastery boasts a wonderful traditional architecture, while it has a seductive view of the Aegean sea. It’s the perfect spot to watch the sunset from!

And what can we say about Amorgos beaches? They are simply gorgeous, with crystal clear waters and glistening sand. The best Amorgos beaches are Aegialis Amorgos, Amorgos Katapola, Agia Anna beach, and Agios Pavlos beach.

Amorgos island, everyone passed by the Cycladic island of Amorgos: pirates and 19th-century travellers, 70’s hippies who camped at Lakki, islanders who sought oracles from the “chattering waters” of Ai-Giorgis Varsamitis. Come yourself as well, and discover a Greek island untouched by mass tourism, whose venerable traditions, old paths and remote villages will make you forget the 20th century, never mind the 21st.

Enjoy your Stay at Amorgos Hotels

You’ll make a pilgrimage to the beach of Agia Anna where Luc Besson shot The Big Blue. Light a candle in the awe-inspiring monastery of Panagia Hozoviotissa. Spend your holidays sipping nightcaps of rakomelo, the homemade honeyed firewater. Take a boat ride from Katapola or Aigiali, the island’s two ports. And walk up to the castle-topped main town with its Cycladic cobblestone streets. When you come to Amorgos island, you will realise just how diverse, wild and exciting this island is.

What to do in Amorgos

Surely this is the most unusual monastery in the Aegean, and one of the most significant sights on the island. Impossibly tall and narrow, at first sight it looks painted onto the sheer rockface. In reality it’s slotted into it. You’ll have to climb 300 steep stairs, enter through the narrow door and trudge up another eight storeys, each only 5m wide. When you reach the main church a thousand years ago, and its Byzantine icons of the Virgin, you’ll know it was worth the effort.

The beach at Agia Anna

A twisty road leads to the beach at Agia Anna. With its endless view of the sea, you’ll know how Besson’s film The Big Blue got its name. Incredibly clear water and rocks to dive from at one of the most exciting beaches in the Cyclades. Now, you’ll be the star.

“Walking at a slow pace” in the mystical charm of Amorgos

The phrase belongs to archaeologist Lila Maragkou, who walked all over Amorgos island for years, turning up archaeological treasures. Walking at a slow pace will reveal the real island to you, too. Things to look for: the remains of three ancient city-states, Arkesini, Minoa and Aigiali; women making fava (yellow split-pea dip), a Cycladic speciality; diviners searching for underground water; locals playing boules; Ai-Giorgis tou Varsamiti, where the “chattering brook” was thought to foretell the future; and the no-man’s-land at Krikelos, riddled with mines and gullies. The longer you seek the more you’ll find.

Hora and the castle, what the pirates missed

A naturally fortified rocky promontory rises above the Cycladic houses. Hidden from pirates’ eyes, the island’s Hora and its castle reflect their Byzantine and Venetian past. Hike up to the castle for a memorable view. Below you the lovely Voreina quarter is full of houses with their own wells and olive presses. You’ll want to investigate the abandoned windmills at Troulos, the shops and cafes at Platystenos, and relax in Monk’s Mill square (Kalogerikos Milos), a genuine balcony over the Aegean.

Aigiali or Katapola? Not any old port in a storm

Which of the island’s two harbours will you choose as the ideal backdrop for your holiday? The music and lounge bars on the sandy beach of Lakki at Aigiali, or family-friendly Katapola with its traditional cafes and long walks along the shore? You decide.

Things to do and see in Amorgos

The rock drawings at Asfondylitis

Short-legged dancing figures holding violins… Learn the story of a handicapped child who left his mark on the rocks of Asfondylitis back in 1888.

The Tower Of Gavras

A 16th century building of Venetian architecture found in the centre of Hora. Today, it’s a museum with findings from excavations from the surrounding area, with the sculptures and inscriptions standing out.

Need a Visa to Travel to Mykonos?

Restaurants and Tavernas in Thassos

Things to do and see in Halkidiki

Spring Holidays in Greece and The Greek Islands

Where to stay in Santorini? Best Hotels and Accommodation

Santorini Island: An Amazing and Most Famous Greek Island in the World