How to get to Kastellorizo Island 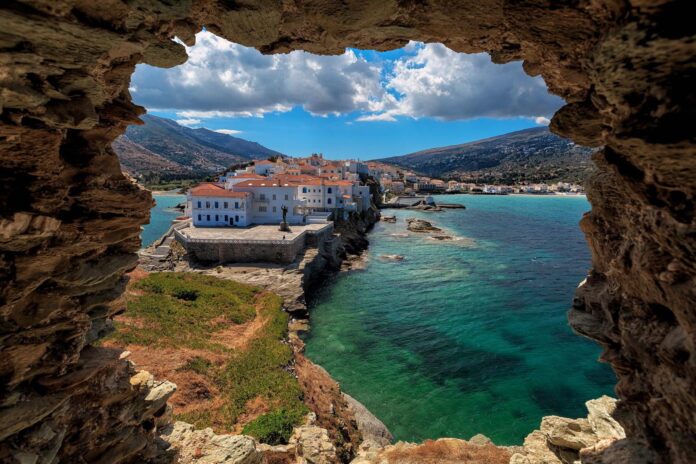 Find out everything about your holidays in Andros on our travel guide! Ideally located in the Cyclades archipelago, Andros Greece is one of the Cyclades islands closest to Athens (a couple of hours ferry ride). Thanks to its proximity to the Greek capital, it has been transformed into one of the most popular Greek island destinations. And you bet there’s a reason for it!

Boasting a natural landscape with lush vegetation, imposing mountains, virgin beaches, and rural villages, Andros Greece is a go-to destination for those who crave a getaway near Athens. Although it is a summertime favorite for tourists, the island has managed to keep its unspoiled charm!

Chora Andros, the gem of the island, stands out for its noble mansions, narrow alleys and cosmopolitan aura that seduces the visitors. While Chora Andros will introduce you to the glorious past of the island, it’s the picturesque villages around it that will make you dive deeper into the essence of Andros’ tradition!

Andros Greece is the northernmost island of the Cyclades island group. It stands out among the generally barren Cycladic islands, thanks to its lush vegetation and scenic natural landscapes. Despite its proximity to Athens, Andros Greece hasn’t been affected much by the mass tourism, managing to keep its laid-back, unspoiled vibe!

Andros Chora, the island’s capital, is a mixture of Venetian, Byzantine and Ottoman architecture. The result? Noble mansions and neoclassical buildings coexisting in harmony with the modern side of the town! Chora owes its architectural beauty to the islanders’ love for the sea, as the imposing mansions used to belong to the local sailors and captains.

Andros beaches are a reason themselves to visit Andros Greece! Organized or virgin, isolated or crowded, Andros beaches seem to be able to please everyone. The most popular of them are Agios Petros, Batsi and Golden Sand. If you are more into virgin and isolated beaches, though, chose Vlychada, Agios Sostis, and Halkolimnionas.

The natural beauty of this verdant island is divine! The hiking paths that cross Andros Greece, will give you the chance to explore its lush vegetation. Packed with walnut trees, chestnut trees, oak trees, and olive trees, Andros is a natural paradise!

In Andros island, you’ll also find some interesting sites, too! Palaiopolis, the ancient capital of Andros, the prehistoric Plaka settlement and Zagora settlement are must-visits. Not to mention the amazing Andros museums! Visit the Museum of Modern Art, the archaeological museums and the Cyclades Olive Museum, to take a dip into the island’s culture!

Are you ready to discover Andros island next summer?

Andros is one of the closest Greek islands to Athens and a popular weekend destination for the Athenians. An attractive island with rich history, Andros Greece distinguishes for the elegant architecture of Chora, the green landscape of the inland and the fabulous beaches. Batsi is the most tourist developed place in Andros island and it is surrounded by wonderful beaches, including Golden Beach and Agios Petros. Among the most beautiful beaches are also Ahla, Vitali and Vlychada, but the road to these beaches is track. A visit to Chora, the capital, will lead you to interesting art museums that frequently host world exhibitions.

Just two hours from the port of Rafina, Andros is the greenest of the Cyclades as well as the second largest after Naxos. And it’s full of surprises. Where else will you find Venetian castles and untouched beaches, rushing rivers and abandoned watermills, a world-class modern art museum and shipowners’ mansions, well-marked hiking trails and dramatic cornices? For all its wealth, it is laid-back and discreet, shy of mass tourism, awaiting discovery by the discerning traveller. Andros will make you wish your holiday here could last forever.

Enjoy your Stay at Andros Hotels

What to do in Andros Island

Andros town, travel to the state of captains

Andriots are above all seafarers, captains, shipowners and sailors. The main town, Hora, is full of stately homes and neoclassical buildings they erected with their earnings a century ago and more. The broad main street exudes prosperity in its marble pavements, open squares, large churches, and carved marble fountain. But don’t expect glitz. Instead its modest shops sell traditional foods, clothes, and sweets.

The central square is the heart of Hora, flanked by the Archaeological Museum and buzzing cafes, with two long beaches spread out below, Paraportiani and Nimborio. If you walk on, into the oldest part of town, you’ll come to a square at the end of the promontory, occupied by a single monumental statue to the Unknown Sailor. You could almost be standing on the prow of a liner.

The Goulandris Museum of Contemporary Art

Each summer hosting an exciting new exhibition, it is reason alone to visit the island. Past treasures have included works by Picasso, Matisse, Klee, Chagall, Rodin, Miro, Kandinsky and many more.

Stenies: a village of mansions

Of all the villages in the lush hills near Hora, Stenies may be the loveliest. Camouflaged by tall trees, its grand houses may tantalise sightseers, but you can explore a 17th century tower, an old stone bridge and a picturesque abandoned factory with a huge waterwheel. Devote a few hours of your holiday on the island to visit these noble sights.

Beaches to last a month of Sundays

Andros beaches are little known wonders: some on the north are accessible only by dirt road or boat, such as Ahla, Zorkos, Ateni, Vitali or Grias to Pidima (Old Lady’s Leap) with its remarkable stone pillar jutting out of the sea). Those to the south – Agios Petros, Batsi, Chryssi Ammos, Fellos, Halkolimionas – are much easier on the tyres. Many are pristine, so bring your own umbrella and refreshments. Others have beach bars or tavernas and all mod cons.

East of Hora, Korthi could belong to another island. Wind-battered at the end of an open bay, this is a place for hikers and adventurers. From here you can climb up to a ravaged Venetian castle and from there walk down the Dipotamata Gorge where watermills once ground Andros wheat. Or you could make the circuit of the pretty villages in the hills. Not afraid of dodgy roads? Drive right to the end of the island where a narrow strait separates Andros from Tinos and visit some venerable monasteries on the way.

Things to do and See in Andros Island

Faneromeni Castle, or Upper Castle, stands in contrast to the even more ruined fortress at the tip of Hora. Prepare to be blown away; the view of the Aegean is magnificent.

The Tourlitis Lighthouse off the tip of Hora is the only one in the Cyclades built on a rock in the middle of the sea.

The villages of Andros

The footpaths of Andros

A network of well-marked hiking paths covers the island. Get yourself a map and follow the arrows that will guide your journey, with the big blue in the background.

What’s the Legal Drinking Age in Greece for tourists?

The City of Volos Close to Pelion Greece

Biking and Cycling Routes on Thassos

What You Need Before Going Holiday: 100 Things You Should Know

Greek Foods and Best Places to Eat in Rhodes Island