Rhodes is the great Greek Island in Dodecanese has a large number of hotels. How much does hotel prices cost about? What kind of...
More
Home Greece Travel Ideas City Break in Athens and Thessaloniki
Facebook
Twitter
Pinterest
WhatsApp
Linkedin 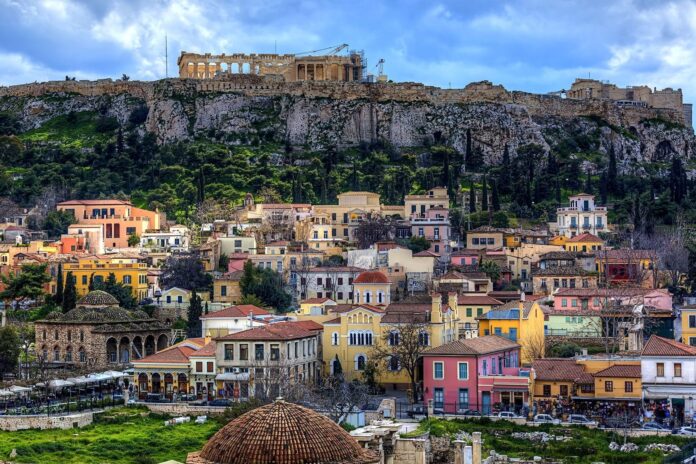 Athens and Thessaloniki: Europe, the Mediterranean, the East and West and the Balkans, all rolled into one. Discover the colours, rhythms, history, attractions, and vibrant life of the two biggest cities in Greece. They will charm you…

Your airplane makes its descent towards Athens. This metropolis with its infinite, rich history and modern vitality welcomes you to experience a weekend filled with incredible imagery. From the New Acropolis Museum to the Agora, ancient Greece will come to life before your eyes. The centre of Athens will surprise you. Walking through the neighbourhoods of Thiseion and Monastiraki, you’ll discover shops with old treasures alongside trendy boutiques. In picturesque Plaka and Anafiotika, you’ll think you’re on an island.

From cosmopolitan Kolonaki to the hip areas of Psyrri and Gazi, you’ll find cool cafes, bars and clubs with a lively Mediterranean vibe. From the neighbourhoods of Athens, to the seaside restaurants serving fresh seafood, you’ll savour the flavours of both traditional and creative gourmet cuisine. If you have time, the beach is at your fingertips: the Athens Riviera, populated with resorts and beach bars, is the perfect short-break holiday.

And a little further down the coast, you’ll find Sounion and its magical sunset turning the Temple of Poseidon all shades of pink and red. Athens offers many high quality accommodation options: from historic hotels in the centre, to boutique and art hotels, large international hotel chains, city and business hotels and, of course, luxury seaside resorts & spas.

A stroll through the centuries of Greek history

Start with the Ancient Agora and its monuments from different eras: the Golden Age of Pericles, Hellenistic, Roman. Presided over by the Sacred Rock of the Acropolis. The cradle of civilisation beckons, so up you go. Your journey through the ages has begun – get to know the most significant stops:

The Museums of Athens

You’ll find a multitude of museums in Athens, with a rich history and important exhibits.

The most popular sights and attractions in Athens

You’re heading up to Northern Greece. There, ‘The Bride of the North,’ Thessaloniki will greet you; a city with a long history and unique vitality The White Tower, Ano Poli, Aristotelous Avenue, shopping on Tsimiski Street, bar hopping on Valaoritou Avenue, the International Film Festival held in the warehouses of the port, live music at Laladadika’s eateries, walks through the vaulted arches and the open air markets, visits to museums and Byzantine monuments.

Thessaloniki is famous for its gastronomy. Here you’ll eat to your heart’s content, your plates brimming with Mediterranean cuisine, peppered with the influences of Asia Minor.

The choice of accommodation in Thessaloniki are endless: restored mansions, boutique hotels, city hotels for business travellers, hotels with casinos and one impressive art-design hotel. No matter where you stay, you won’t want to leave.

THESSALONIKI: A MELTING POT OF CULTURES

Get to know the multitude of cultures that coexisted for centuries in Thessaloniki. During your visit to Thessaloniki, it’s worth making a stop at these three significant landmarks:

The most popular sights and attractions in Thessaloniki

Thessaloniki: Awesome Reasons You Should Read Before You Go Greece

What’s the Legal Drinking Age in Greece for tourists?

How to get to Kastellorizo Island

Where is Thassos Island?

Thessaly: Home of The Meteora and Pelion in Greece

The Best 10 Things to Do in Kastellorizo Island

Where to Eat And Drink in Santorini

The Best Beaches in Halkidiki

How to get to Thassos

Best Restaurants in Mykonos – Where to Eat

Where to Stay in Halkidiki