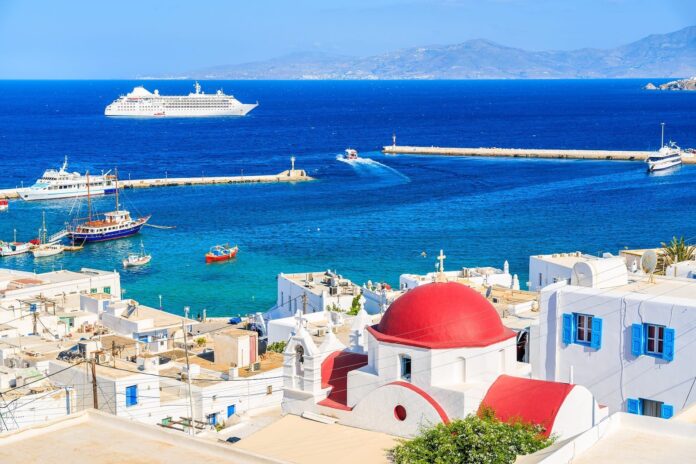 Greece Holidays in Cyclades Islands within easy reach of Athens, these are the Aegean’s most precious gems. Ancient Greek geographers gave this unique cluster of islands the name Cyclades because they viewed them as forming a hypothetical circle (kyklos) around the sacred island of Delos. According to myth, the islands were the scraps that remained after a battle between giants. In reality, they resulted from gigantic geological events like earthquakes and volcanic eruptions.

The Cyclades are an island group in the Aegean Sea, southeast of mainland Greece and a former administrative prefecture of Greece. They are one of the island groups which constitute the Aegean archipelago.

Greek Islands of Cyclades: Their colours are blue and white like the Greek flag. The islands come in all sizes and, though the ingredients are the same – incomparable light, translucent water, heavenly beaches, lustrous white buildings and bare rock, each one has its own distinct character. The group’s stars, Mykonos and Santorini, need no introduction but the lesser-known islands, big and small, are just as rewarding. For starters, try aristocratic Syros, cosmopolitan Paros, the sculptors’ Tinos, big, generous Naxos, exotic Milos and historic Delos, not to mention the ‘hidden gems’ that adorn the Aegean: Tzia/Kea, Kythnos, Sifnos, Serifos, Amorgos, Sikinos, Anafi and Folegandros. Whether you’re travelling with your family, friends or sweetheart, you’re bound to find your summer paradise in the sun in the Cyclades.

What’s your idea of the perfect beach? Green-blue water and white sand? Beach bars and water sports? Framed by rocks for snorkelling and scuba diving?

A secret Aegean cove accessible only on foot or by boat? No matter what your ideal is, you’ll find it in the Cyclades. First stop: Mykonos with its extra golden sand, turquoise water and 5-star facilities. Paradise, Super Paradise, Psarou and Elia, all rank in the top 10 beaches worldwide.

Next comes volcanic Milos, with the biggest range of colours and rock formations, as at Sarakiniko and Kleftiko, and Santorini’s black and red beaches like Kamari, Perissa and Perivolo that reveal the wild beauty of the Cyclades. Small Serifos is ringed with beaches, while rugged Amorgos can claim the ‘Big Blue’ at Agia Anna beach, where Luc Besson shot his film. Andros’ ‘secret’ sandy beaches, like Ahla and Grias to Pidima, win rave reviews for being extra photogenic, as does Tinos for the round boulders at Livada and the enormous dune at Pachia Ammos (Fat Sand). For getting away from it all, both tiny Polyaigos, between Kimolos and Milos, and the Lesser Cyclades, near Naxos, offer unexplored destinations of raw beauty, for those who come by yacht.

Time for a free history lesson

Thousands of years of civilisation evolved here in the Cyclades, much of it visible in local archaeological sites and museums. You’ll see it unwind on the whole island of Delos and Santorini’s Akrotiri, the Minoan Pompei. In the two colossal Archaic statues lying on Naxos and in Kea’s ancient Karthaia. Virtually every island has at least one ancient ruin.

While beautiful, typically Cycladic churches exist on every island, the most visited are the 19th century Panagia on Tinos, the early Byzantine Ekatontapyliani on Paros, and the 11th century Hozoviotissa monastery on Amorgos. The best museums to visit are: Santorini’s Prehistoric Thera, Andros’ Contemporary Art and Archaeology, the Industrial Museum at Syros’ Ermoupoli, Amorgos’ Archaeology Museum; Milos’ museums of Mining and Archaeology with a copy of the famous Venus de Milo; Tinos’ Museum of Marble Crafts at Pyrgos, and the Archaeology and Venetian museums on Naxos.

Action against a Cycladic backdrop

Known for the iconic blues and whites of their villages and their stunning beaches, the Cycladic islands equally deserve worldwide renown for what their crystalline waters and covestudded shoreline offer to sailors and sea lovers. Are you looking for action on the water? From the private coves of the Lesser Cyclades, to wind- and kite-surfing in Paros, and fun-filled watersports, there are options for everyone. On land, discover the well-marked hiking trails exist on all the islands, especially on Naxos, Tinos, Amorgos, Syros and Andros. They cross rugged landscapes made all the more enchanting by castles, chapels, ruined towers and antiquities.

Every island specialises in a local treat with an aroma of the Aegean. Santorini’s volcanic soil produces exceptional wines and extra delicious small tomatoes, capers, white aubergines, grown without water. On the other islands, look for wonderful cheeses like spicy kopanisti and xinotyro on Mykonos, arseniko on Naxos, San Michali on Tinos, Paros and Syros. The rich omelette called froutalia on Tinos and Andros, sausages and cured pork fillet (louza) on Mykonos and Tinos, clay-pot chickpeas on Sifnos, and sweets like pastelli (sesame bars) and amygdalota (crushed almond shortbread) on all the islands. All the islands also distill their own versions of firewater but Tinos’ raki is thought to be more refined and lighter, while on Amorgos they drink rakomelo, raki mixed with honey.

The most significant sights in the Cyclades

Where is Cappadocia in Turkey

What is the currency in Crete

Thessaly: Home of The Meteora and Pelion in Greece

Santorini Travel Guide – Holiday Budget and Things to Do