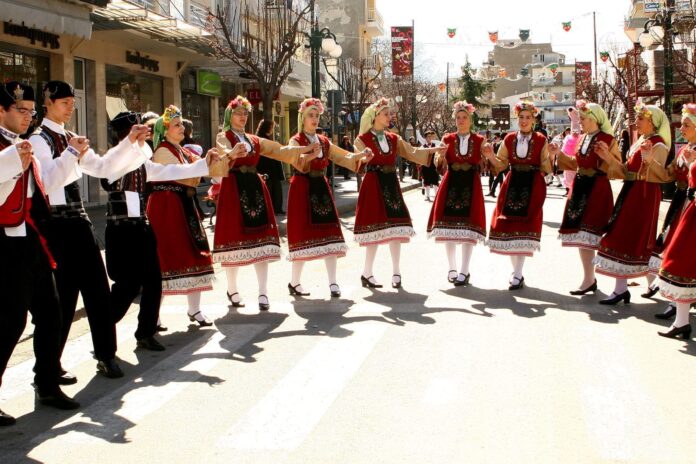 Customs whose origins are lost in the mists of time. Cultural practises that have been observed since Homer’s day. Fascinating traditions tied to different clans and localities, with multiple layers of social, economic and ritual significance. Rites inextricably connected with specific places, communities and holidays.

Discover the deep roots of this ancient land, the things that set it apart from anywhere else. Get to know the Greek customs and local traditions: from Crete to Macedonia, from the Aegean to the Ionian islands, the wealth, diversity and colour of this country’s customs and traditions will astonish you.

In Greece, tradition is still alive. During your holidays here you’ll meet locals dressed in traditional costumes. In western Crete the older men still proudly sport their high boots, breeches and black-tasselled kerchiefs; on Karpathos the women have two sets of costumes, a simple one for every day and a very elaborate, colorful one for festivals and weddings; in Metsovo on special occasions you’ll see men in embroidered waistcoats, woolly hats, woven trousers and clogs.

Perhaps even more powerfully ‘present’ in Greece’s everyday culture are traditional dances. Greek communities everywhere love to dance, in couples or in circles, young and old, and in dancing they celebrate their homeland and their roots, the ties that bind. The musicians, playing on handmade traditional instruments, contribute the rhythm to festivals and parties all year long.

Customs and Traditions of Greece

Birth, baptism, engagement, wedding, funerals: the milestones that give shape and definition to life and a person’s place in society. If you’re lucky, your holidays in Greece will include witnessing or even taking part in the following:
Traditional weddings that start with dressing the bride and bouncing a boy baby on the nuptial bed. The bride escorted to the church by musicians. The especially complex wedding rituals of Lefkas. The wrenching Maniot dirges, the musical accompaniment on the journey to the other world.

And you’ll find festivities everywhere, but Patras boasts the most organised and famous celebrations where disguises, fertility symbols, provocative behaviour, wild music, endless dancing, pranks – many with their roots in pagan fertility rites – precede the austerity of Lent.

In autumn, the slaughtering of the family pig in Crete and the Aegean islands; making May wreaths before sunrise on the First of May and burning them on Midsummer Eve; and on Zakynthos, on September 14, the day of the True Cross, blessing the flour and basil for leavening bread.

In Greece, every region has its own wealth of traditions for these important dates on the calendar, with special holiday foods, songs or seasonal carols like the Christmas kalanda. On Epiphany, young men on all the islands and coastal regions of the mainland dive into the cold sea to be the one who retrieves the cross thrown by the priest.

Easter celebrations hold a special place in Greek tradition. Holy Week before Easter is solemn but full of anticipation. On Maundy Thursday, the place to be is Patmos where the Last Supper is piously re-enacted in a mass, but on Good Friday every church in the country has its own candlelit procession following the bier of Christ decorated with white flowers. Easter customs differ widely, from the marching bands and ‘breaking of the pots’ in Corfu to the ‘rocket wars’ of Vrontado, Chios. In Arahova, on April 23, or on Easter Monday if the date falls within Lent, the feast day of St George takes place with competitions in traditional costume.

Saints Days are celebrated in rural chapels and town churches all year round. Usually preceded by a mass on the eve of the local or patron saint’s name day, the panigyri – festival – features free food, drink, traditional music and dancing with the congregation into the wee hours. On the Ionian islands of Corfu, Kefalonia and Zante, the patron saints Spyridon, Gerasimos and Dionysios are honoured with panache and processions accompanied by marching bands.

In Agiassos on Lesvos, on Prophet Elijah day, riders on decorated horses climb up to the mountain chapel, where one of them will be selected to bring down the Prophet’s icon. The celebrations on August 15 in honour of the Virgin, attract thousands of worshipers. Especially popular are those at the cathedral of Tinos, Ekatondapyliani on Paros and Hozoviotissa on Amorgos.

Ethnic Diversity and Tradition in Greece

Vlachs, Cretans, Epirots, Macedonians, Aegean and Ionian islanders, Greeks from the Pontus (Caucasus), Asia Minor and Egypt, Pomaks, Thracians, Tsakones, Sarakatsans, Maniots, Arvanites (of Albanian descent)… the roots of the Greeks are deep and complex. Roots that can be traced back centuries and that reach many corners of the earth.

A fascinating mosaic of tribes, some nomadic, some indigenous, some from former ancient colonies, who eventually settled in Greece. A uniquely diverse population for such a small and yet boundless country. A country of seafarers, with open horizons. Dozens of different microcosms. Smaller circles within the larger ‘nation’ that unites them.

Each one with its own characteristic customs, traditions, manners, holidays, cuisine and local products, art, costumes, architecture, dances, songs, idioms and dialects.

Discover them one by one, travelling to known and little known destinations in Greece.

Investigate their particularities, the features that connect them, those that make them distinct.

Take part in their festivities, in their daily lives, their symbolic rituals. You’ll be charmed by their authenticity, the love and pride each group has in its homeland and roots. Love and pride they show and share with anyone who displays an interest.

Do not miss these posts!

Art and Modern Culture in Greece

How to get to Mykonos island

Where is Bozcaada in Turkey

Biking and Cycling Routes on Thassos

Patras: Best Holiday Destination Located in North-West of the Peloponnese

Things to do and see in Thassos

Where is Cappadocia in Turkey